At the opening ceremony, participating officials from the Pan-Pearl “9+2” Provinces (Regions) and Tencent jointly launched the “Digital PPRD Campaign”, which will usher in more opportunities for the development of the PPRD region in the new era. Digital technology is expected to become a cross-regional innovation engine, driving forward the upgrade of a wide range of fields in society, including government administration, people’s livelihood, industrial ecology, talent pool, culture etc., as well as the coordinated development of the regional economy in a broader sense. 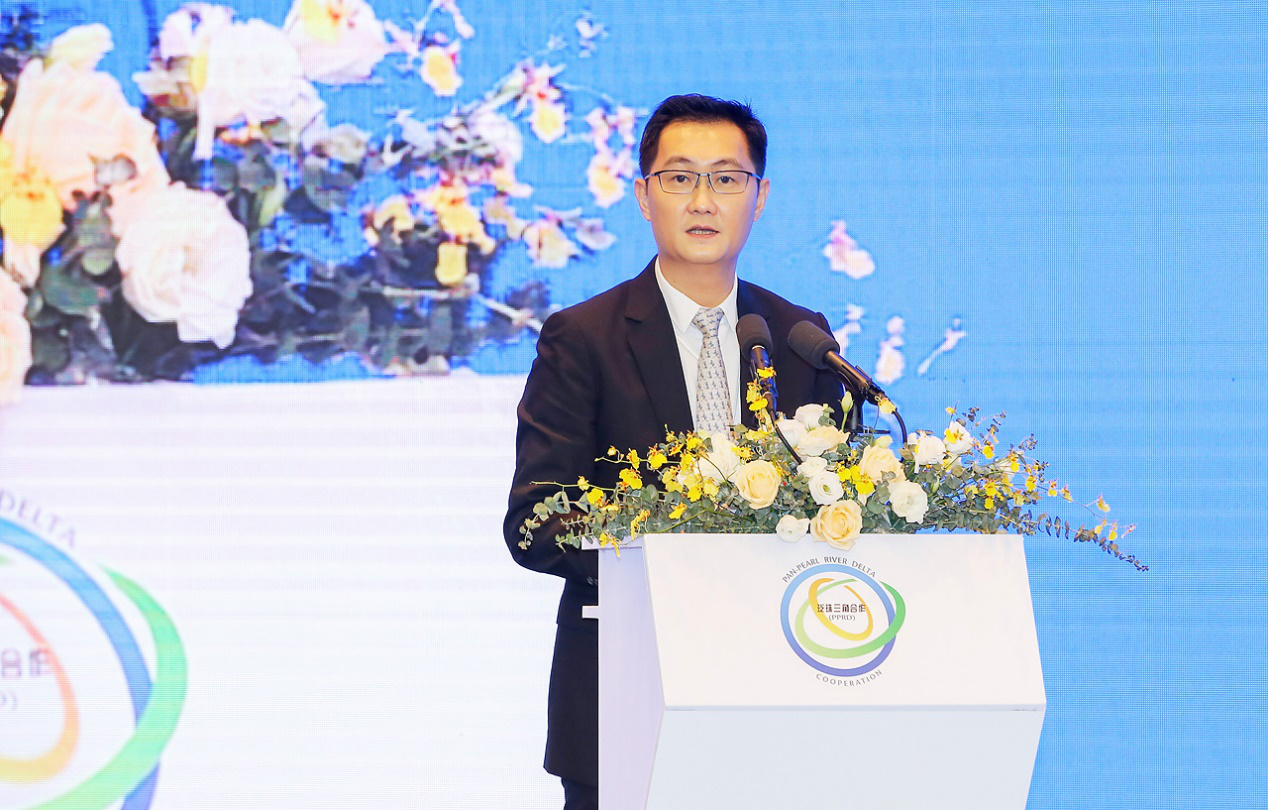 Pony Ma, Chairman and CEO of Tencent delivers the keynote speech at the Forum.

In his keynote speech, Chairman and CEO of Tencent, Pony Ma expressed his views on the development of the PPRD region and regional digitalization process.

“The Pan-Pearl regional cooperation, which began in 2003, has introduced in a new starting point in the context of a new round of global technology and industrial revolution. In the future, through “digital transformation”, the “9+2” provinces and regions will be connected and assembled into a “Digital Pan-Pearl”, which will truly draw on the potential presented by industrial clusters and collaborative innovation, thus achieving the “9+2 greater than 11” effect”, said Pony Ma at the Forum.

In recent years, Tencent and its partners have positioned themselves as digital assistants. By providing the most effective digital interface and the most abundant digital toolbox, Tencent has been building the digital ecology together with governments and enterprises of the “9+2” provinces and regions in the PPRD region. Tencent have assisted the digital transformation and upgrade of various industries and fields in the PPRD region, covering people’s livelihood, government administration, life and recreation, production and service, life and health, and environmental protection, and so forth, contributing its own resources and expertise in information technology to the development of the region.

Pony Ma believes that in the digital transformation, the Greater Bay Area, with its prominent advantages in science and technology, can play the role as the locomotive of the “Rejuvenation” train of digital China, and the provinces and regions in the PPRD region can tap into their respective advantages and become the self-propelled carriages, making the train run more smoothly and faster. The High-tech Greater Bay Area, Digital PPRD Region and Digital China are becoming three concentric circles on the strategic blueprint, and it is critical to achieve the “three-circle synergy and integrated development”.

Pony Ma called on entrepreneurs from the PPRD region to set up international headquarters in the Bay Area, where they will be able to share global opportunities brought by the Area, especially the connection between Hong Kong and Macao, and to build a global industry and explore a vaster blue ocean.

He believes that while facing anti-globalization, it is even more urgent that the Greater Bay Area and the PPRD region should join hands and have the courage to “ride the wind and break the waves”, so that China can open up more global market through innovation. Just as rivers must eventually flow into the ocean, the transition of China’s economy from high-speed growth to high-quality development is unstoppable.

Tencent Chairman and CEO Pony Ma’s book Guangdong-Hong Kong-Macao Greater Bay Area: Digital revolution Opens Chinese Bay Era made its debut in recent days. The book, through an analysis of the experiences and trends of other bay areas in the world from various angels such as economy, politics, rule of law, innovation, etc., elucidates the grand conception of the Guangdong, Guangdong-Hong Kong-Macao Greater Bay Area, and explicitly proposes a development path driven by digital innovation for bay areas in China.

In the afternoon, the guests exchanged ideas and presented suggestions on scientific and technological innovation, cultural development and talent development, as well as discussed the development of the Greater Bay Area.

Co-founder, Chairman and Chief Executive Officer of Tencent Pony Ma shares his vision at the Forum.

Pony said that Tencent will focus on technological breakthroughs, application scenarios and technological development in open ecological fields. As fruits of scientific and technological progress are being integrated into all aspects of life in the Greater Bay Area, connections within the area are accelerating. In the future, Guangdong, Hong Kong and Macao will be increasingly interdependent. For example, the three places will be connected with better transport as more roads and bridges are being built; talents in science and technology will flow more freely in the Area; governments and enterprise will jointly promote the cooperation among industries; the bonds among young people in Guangdong, Hong Kong and Macao will be tighter.

Edward Cheng, Vice President of Tencent, said that the Greater Bay Area is both an economic concept and a cultural concept. If the different cultures in the area are fully integrated, they will complement each other, which not only helps to inherit the traditional cultures of China, but also creates more possibilities for cooperation in the cultural field and, as a result, creates more excellent new cultures. Tencent will give full play to its role of “connector” and “booster” by utilizing its expertise in connection and content to achieve a virtuous circle of industrial value and cultural value, to actively promote the inheritance and innovation of Chinese excellent traditional cultures, and to forge more Chinese cultural symbols with world influence. These are the goals of Tencent’s engagement in cultural and innovation fields.

Vice President of the Palace Museum said that as the center of the Lingnan culture, the Pearl River Delta region where Guangdong, Hong Kong and Macao are located has accumulated diverse, open, compatible and innovative cultural characteristics over the past millennium. Therefore, to promote cultural development in the Greater Bay Area, we must follow the principle of creative transformation and innovative development, which means that we should focus more on innovation. Hence, we should use a variety of means including digital technology to reveal, interpret and transform traditional cultures, and create on the basis of Chinese traditional culture a new culture of the new era.

Regarding talents, Rao Yi, who is a renowned biologist and also Dean of Sciences at Peking University, believes that in today’s world, the development big countries and metropolises are inseparable from higher education and technology. Therefore, attracting high-caliber talents, establishing high-quality scientific research institutions, and producing high-quality scientific research results on fundamental and applied sciences will be pillars of great significance for the further development of the Bay Area. 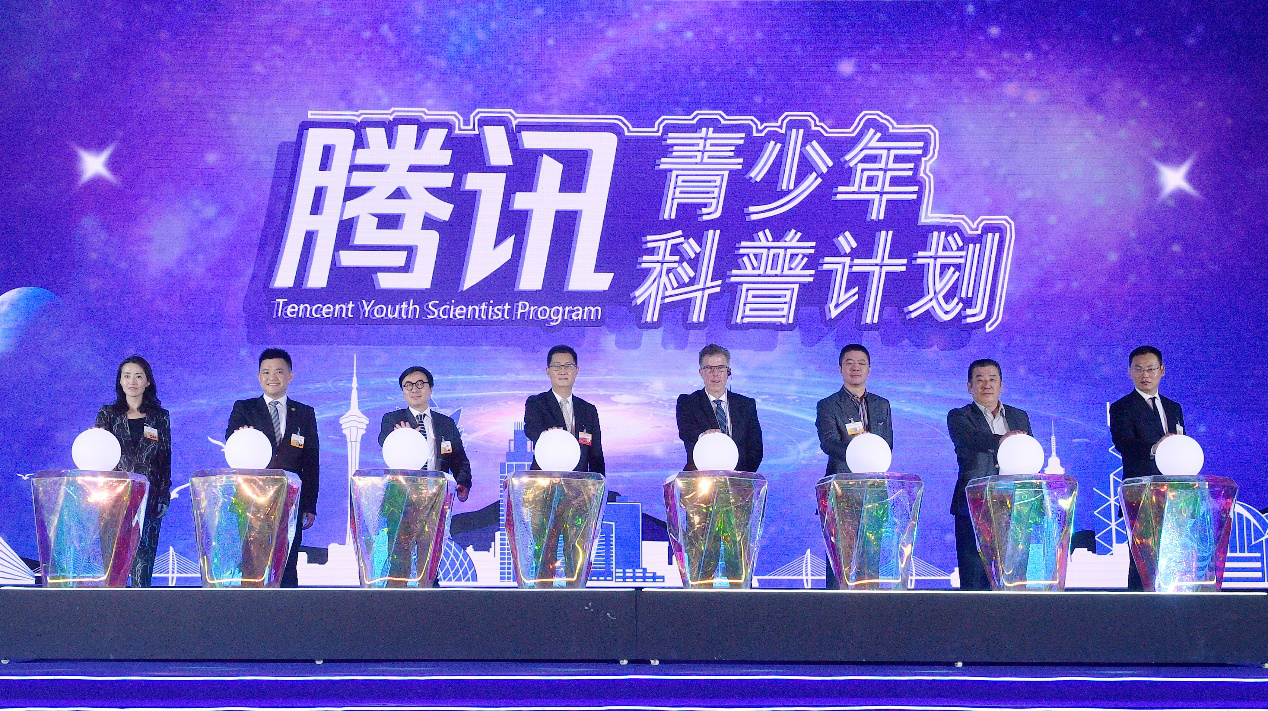 Tencent and its partners launch the “Tencent Youth Scientist Program”.

During the forum, Tencent and its partners jointly launched the “Tencent Youth Scientist Program”, which covers a number of important projects related to the development of teenagers in the Bay Area. These projects included the “Top Ten Science Watch List of the Year” launched by Tencent and Science/AAAS, the “Chinese Space Station Communication Project for Teenagers” developed by Tencent and the Technology and Engineering Center for Space Utilization of Chinese Academy of Sciences, and the “Bay Area Youth Fashion Season” created by Tencent in cooperation with and the Shenzhen Committee of the Youth League and the School of Design and Innovation of Tongji University.

For the “Top Ten Science Watch List of the Year” project, important scientific events are selected by world’s top scientists and authoritative science editors and then presented to teenagers as short videos via the Tencent platform.

“Chinese Space Station Communication Project for Teenagers” collects ideas of teenagers about space science experiments and introduces to them information about Chinese aerospace industry. The project, aiming to help China realize its space dream, will enable the creativity of teenagers to become a reality in the outer space.

“Bay Area Youth Fashion Season” presents youth innovation, entrepreneurship and future lifestyles in the form of technology + culture exhibition. The project invites young students from the Bay Area to visit the site, where they can experience the most cutting-edge technological and cultural achievements in the Bay Area and exchange their innovative ideas.