The sharing session features various activities. Experts from Institute for the Study of Paintings and Calligraphy of the Palace Museum and musicians appreciated the paintings together. The finalists performed the excellent music pieces from the Next Idea contest which were made into an album exclusively released by QQ Music. In addition, the session showcased the cooperation outcomes of the Palace Museum and Tencent over the past three years.

Director Shan Jixiang of the Palace Museum delivers a speech at the session.

Vice President Cheng Wu of Tencent delivers a speech at the event.

“In cooperation with the Palace Museum for over three years, we have achieved a cultural breakthrough by virtue of digital technology. Together, we have witnessed the integrated development of science and technology and culture, beheld the power of innovation and inheritance, created Chinese experience and set new heights for the global digitalization of cultural museums,” said Vice President Cheng Wu of Tencent. “Revitalizing the inheritance injects impetus to traditional culture and presents an opportunity in the new era as well as a historic responsibility. Tencent leveraged our own capabilities to provide innovative social services of “digitalizing and revitalizing traditional culture”. We’ll continue to serve as the connector and converter of the traditional culture, boost social progress and showcase a more splendid traditional culture in the digital age.”

The Palace Museum and Tencent officially established a partnership in July 2016 to jointly promote the in-depth integration of traditional culture with digital creativity and “revitalize” the traditional culture represented by the Place Museum by means of the top ten activities and frontier technologies in the culture and creativity industry, including social media, game, animation, music, tools, youth innovation contests, AI, cloud computing, LBS, and eye movement technique. They have launched more than ten outstanding products, including the Palace Museum-themed emojis on Tencent’s instant messaging software QQ, Miracle Nikki—on the theme of traditional costumes in the Palace Museum, themed comic Echo of the Place Museum, the Palace Museum app, Tiantian Photo Editing App—on the theme of “lip gloss from the national treasures of Palace Museum”, and “ancient paintings can sing” musical album.

The debut digital musical album themed on the ancient paintings in the Palace Museum is released by the honored guests.

A musical album has been launched for the first time, featuring a selection of songs from the Place Museum X Tencent Next Idea music contest 2018 jointly held by The Palace Museum, Tencent Next Idea and QQ Music. On the first day it went online, the video of its first song A Thousand Miles of Rivers and Mountains, ba

In collaboration with Tencent’s dress up game Miracle Nikki, the Palace Museum granted the authorization of the images of “traditional costume culture”. The court dress skins from the first stage of cooperation themed on “Qing Dynasty empresses’ court dresses” and “Twelve Beauties of Prince Yong” were downloaded nearly 40 million times. Echo of the Palace Museum, the first comic series on the Palace Museum, portrays the stories of sending its relics to Shanghai. Its serials were published on Tencent Comic and topped the most popular list on the platform. The AI-ba

Such innovations in the forms loved by the public, combined with Tencent’s powerful product matrix, has helped the traditional culture represented by the Palace Museum permeate the public life and further integrated into the lifestyle of the young people. 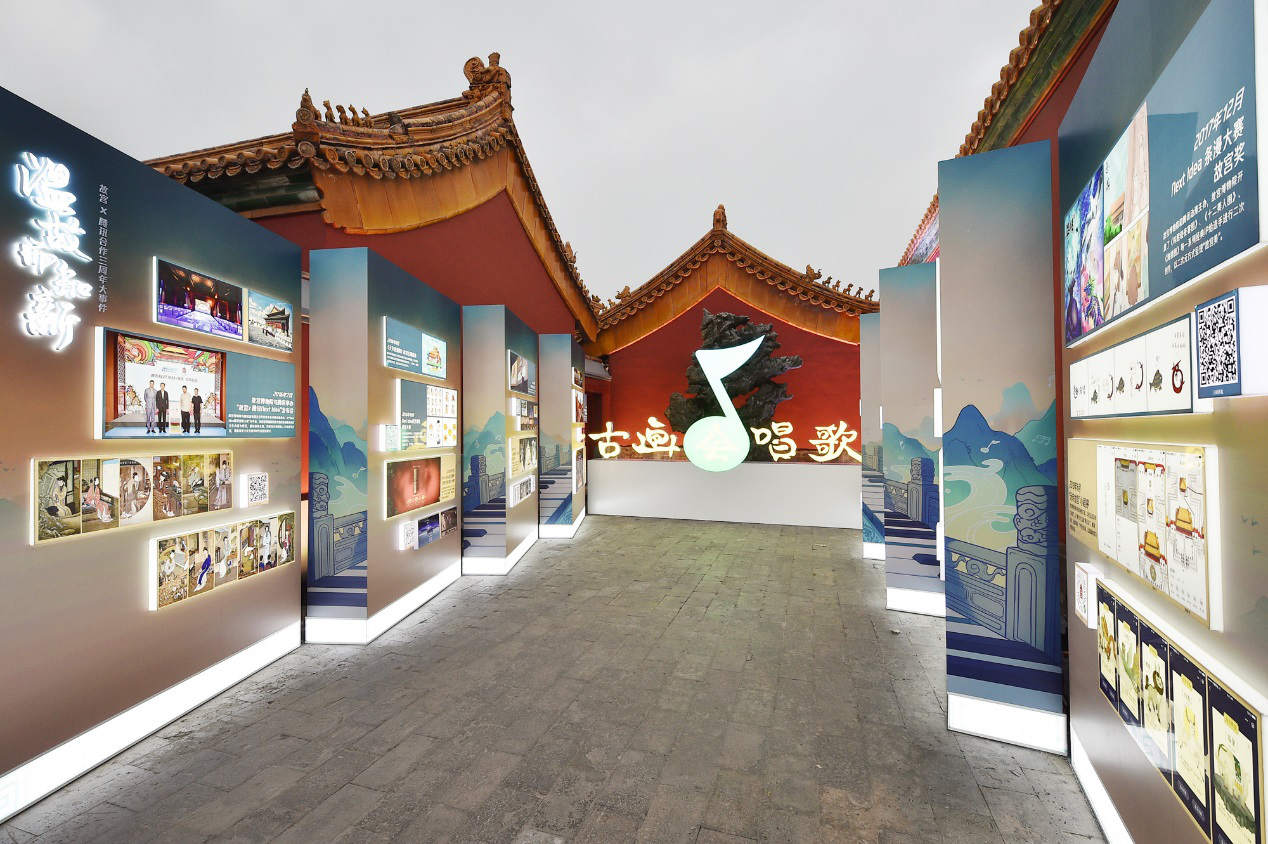 The sharing session showcases the achievements of cooperation between Tencent and the Palace Museum over the past three years.

A Variety of Functional and Avant-garde Games for Edutainment

In combination with the concept of “making the Palace Museum a way of life” lately proposed by the Palace Museum, the two sides conducted in-depth cooperation in games and developed a variety of functional and avant-garde games. Take “The Fifth Great Invention” for example. It won the golden award in the first Next Idea contest on “creative online games” since the establishment of partnership between the Palace Museum and Tencent. The applied game is designed on the basis of the “mortise and tenon joint”, a vital part in the ancient Chinese architectural art, in a bid to help pla 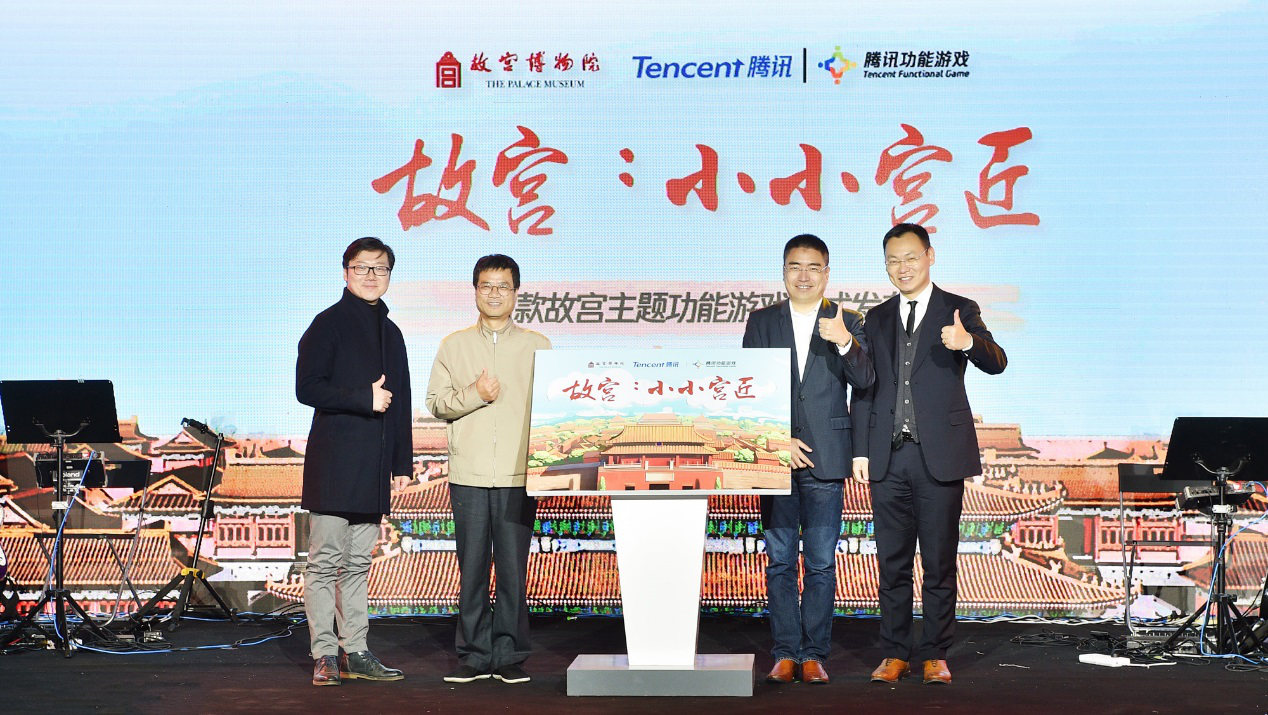 In addition, the avant-garde eye-movement game “Eye·Dream” was launched at the event. This is Tencent’s first game ba

The cooperation between the Palace Museum and Tencent integrates the brilliant traditional culture with the games and conducts in-depth exploration of the games’ role in education.

In addition to innovative revitalization of traditional culture in digital forms, the two sides established “Palace Museum—Tencent Creative Lab” in 2017. By virtue of Tencent’s technical advantages, the two sides jointly explored the application of the advanced digital technologies to the conservation, research and display of cultural heritage. By tightly integrating the conservation of cultural heritage with various li

The public launch of frontend products, such as the navigation app “Palace Museum” incubated in the lab and ba

As regards the backend platform building, Tencent Cloud provided technical support for the Palace Museum to establish online platform, achieve rapid expansion to meet the increasing demands for online services in the future, and store the multiple backups of digital images of the cultural relic collection in the Tencent Cloud to ensure the data security of the digital cultural relic. Currently, the two sides will discuss further cooperation in the conservation of digital cultural relic and other fields by use of blockchain technology.

The Palace Museum has comprehensively cooperated with Tencent in the protection, restoration, display, publicity, exhibition, dissemination and public service to advance the digital construction of the Palace Museum in an all-round manner. The three-year cooperation in innovating and revitalizing the digital contents of the “neo-culture creativity” as well as the new-tech’s full-chain support to the digital cultural museum has given birth to a complete digital culture protection solution. Such advanced solution will surely further promote the inheritance of traditional culture, create a growing number of widely popular Chinese cultural symbols and set up new heights in digital cultural museums.