(21 Nov, Shenzhen, China) Tencent Games announced a new brand proposition with the launch of a new logo and adoption of a new tagline “Spark More!”, which has evolved from “Create Happiness From The Heart”, a tagline that has been used in the past nine years. In an internal email, Mark Ren, Tencent’s Chief Operating Officer emphasized that this brand upgrade is also “an upgrade on the cognition, value and mission on game business. ”. 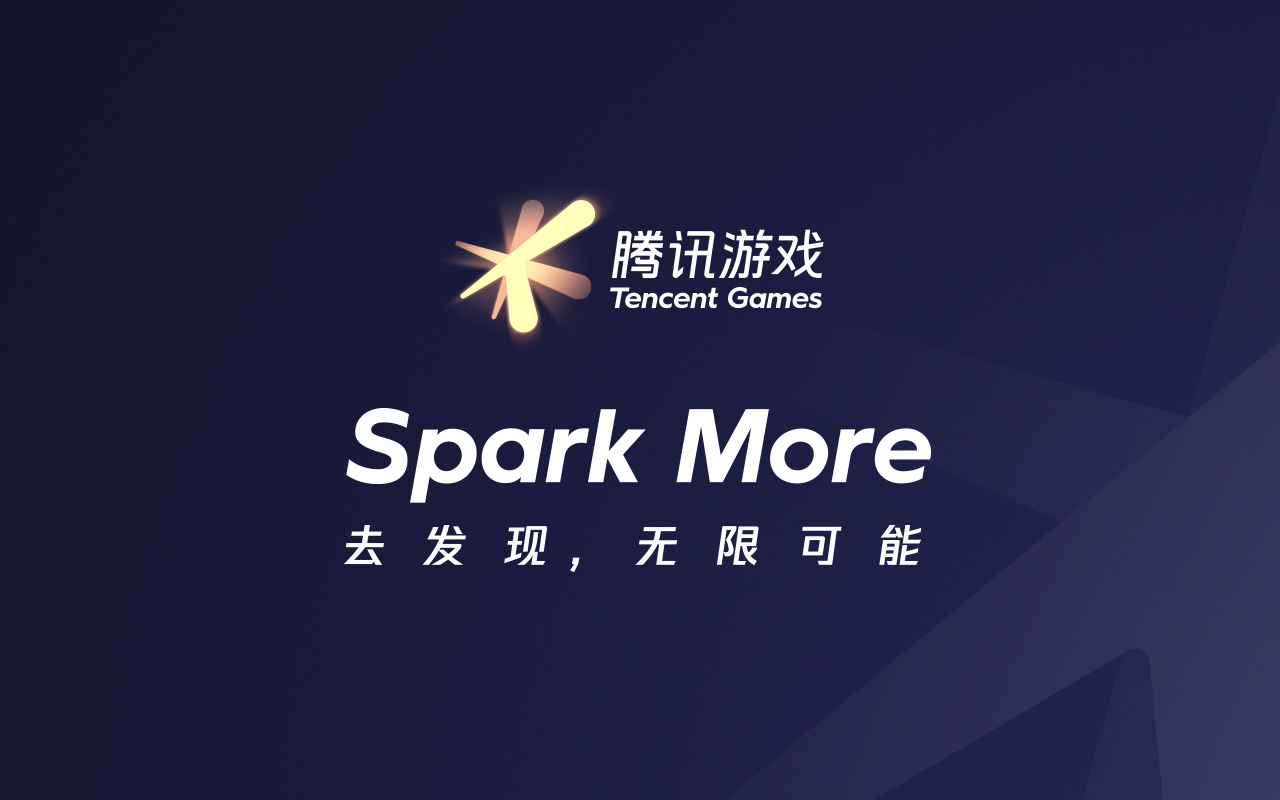 The creative design of Tencent Games' new brand identity, which resembles a bright, fiery spark, truly embodies the vision of “Spark More”. It signifies that online games do not only ignite happy moments but also kindle connections between people and inflame passion and inspiration. It also demonstrates Tencent Games' aspiration of joining forces with users, business partners and the whole community, to discover more opportunities to promote cultural heritage, social values, civic responsibility, technological innovation, and cultural exchange via games.

Today, Tencent Games is the world's largest game development, publish and operation platform which has launched 480 products and serves more than 800 million users in more than 200 countries and regions around the world. Moving forward, while pursuing business sustainability, Tencent Games vouches to adhere to Tencent group's mission and vision - “Value for Users, Tech for Good” through its commitment to corporate social responsibility.

Below is Mark Ren's open letter:

Today, we are proud to announce that Tencent Games will officially launch a new brand proposition: “Spark More”!

All products of Tencent Games will be gradually updated with new brand logos. But what I want to emphasize is that this brand update is not only just a brand event, but also an upgrade of game cognition and an important upgrade of the value pursuit and vision as well. In the meantime, on behalf of the IEG core management team, I would like to briefly introduce the thinking behind it to give you a clearer picture.

Whether we were beginners in the industry in 2002, or we are the leaders of the industry today, we are always inseparable from the most basic question: what is a game?

Perhaps different eras have different answers, but it is not difficult to find, games have always been part of human nature during the long course of history. Since ancient times, games have been enabling children to naturally interact with adults and acquire common sense as the innate ability of human beings. Games have allowed people to work together to overcome obstacles and achieve goals based on clear rules. Games also have become a link for an ethnic group to gather emotion and spread culture. Whether it’s from the Gachuha in nomadic tents to African Chess on pyramid stone carvings, or from the passionate Capoeira to elegant Competitive Karuta, games have always existed in different times and nations, constantly updated their own form and affected people's lives.

After entering the information age, the development of science and technology has not only reshaped the form of games, but also given them a more unique value. A few decades ago, when computers were just complex industrial machines, the emergence of video games represented by "Pong" was the first to break down the barriers between cutting-edge technology and daily life. It has not only made new technologies such as personal computers, graphical interfaces and the Internet more approachable, but also created huge demand for software, hardware and communications markets. Furthermore, it has also attracted young people's curiosity about digital technology, promoted the popularity of computers and Internet knowledge, and laid a solid foundation for the sustainable development of an information-based society.

Today, with the rapid development of modern digital technology, games have grown into an independent emerging industry. In the last decade, China's game industry has grown at an average annual rate of 27%, and games have gradually become one of the most popular digital cultural experiences, which brings new opportunities and possibilities to the whole industry.

Fortunately, Tencent Games grew up in an era full of possibilities. We started from small team with "no game gene” and are now the largest game development and distribution platform in the world. We, together with our partners, have launched 480 products and serve 800 million users from more than 200 countries and regions. We have continuously enhanced our independent R & D capabilities, and successively launched phenomenal products such as "League of Legends", "Honor of Kings", "PUBG Mobile", "Peacekeeper Elite" and "Call of Duty Mobile", which are popular in the domestic and global markets. We also continue to connect the world’s best products, technology and development teams and work with 150 overseas industry leaders including Riot Games, Supercell, Epic Games, Activision Blizzard, Ubisoft and Nintendo.

With the growth of volume and scale, we are also pleased to see that the function and value of games to society are constantly evolving and enriching lives. Online games promote the development of the e-sports industry, building a richer emotional connection and interaction between people. Many popular game products are also trying to turn the classics of traditional culture into a digital art experience, so that games can become a new carrier to inherit and carry forward the excellence of culture and further promote Chinese culture. Moreover, we have also launched 19 functional games to continuously explore the application value of games in the fields of education, public welfare, culture, science and technology. For example, we have launched a video game about the experience of being visually impaired and it has aroused public concern about the living conditions they face. Such examples are increasingly happening around us, changing our understanding of the boundaries of games.

Therefore, I believe that the possibility of games is much more than what we expected it to be. As the "the ninth art" after literature, painting, dance, music, sculpture, drama, architecture and film, games are actually very young compared with the traditional cultural form. Games integrate the best of culture and cutting-edge technology into its own development, constantly showing unique interaction, sociality and inclusiveness.

In the process of discovery and exploration, opportunities and challenges will accompany each other. In the past few years, the popularity of the mobile Internet has brought great impact to the whole society, and the protection of the youth has also received great attention. To address the challenge, we put social responsibility firmly above business. We quickly established the Child Growth and Guardian Platform covering the whole process and applied new technologies such as public security real name verification and facial recognition verification. Many attempts have set a precedent for the game industry in China and the world. To date, an average of 5.6 million youth users have been protected by this game mechanism every day and more younger users actively take part in this system. This is still not the end of our work, but the starting point for the future. Responsibility is always the first step to the future and the cornerstone of finding infinite possibilities.

In this ever-changing era, our attitude towards games determines the width and future of the industry, but also determines the warmth of any future games. “Spark More” not only represents our brand concept, but also means that we will carry out a long-term and systematic exploration of the value and possibility of all games.

Adhering to the company's "Value for Users, Tech for Good" vision and mission, we hope that every IEGer discovers and creates a positive energy towards games and users, and to the world!