The Long Battle Against Desertification

“Desertification” may sound like the natural process of creating deserts, but it actually means something much worse. Deserts are created in nature through a process called desertization – desertification is the change of fertile soil into drylands due to factors like climate change, deforestation, and agriculture.

Desertification is a phenomenon that ranks among the greatest environmental challenges of our time. Every year 12 million hectares of land are lost to desertification and drought alone – an area that could otherwise produce 20 million tons of grain. Desertification and land degradation result in US$42 billion in lost earnings each year, with some 50 million people to be displaced within the next decade. Even more alarming, the pace of arable land degradation is estimated at 30 to 35 times the historical rate.

This problem is sure to become more severe as global temperatures rise and human populations grow. The world’s deserts are already expanding at the rate of about 50,000-70,000 square kilometers a year. That is the equivalent of losing Shanghai – 11 times a year. 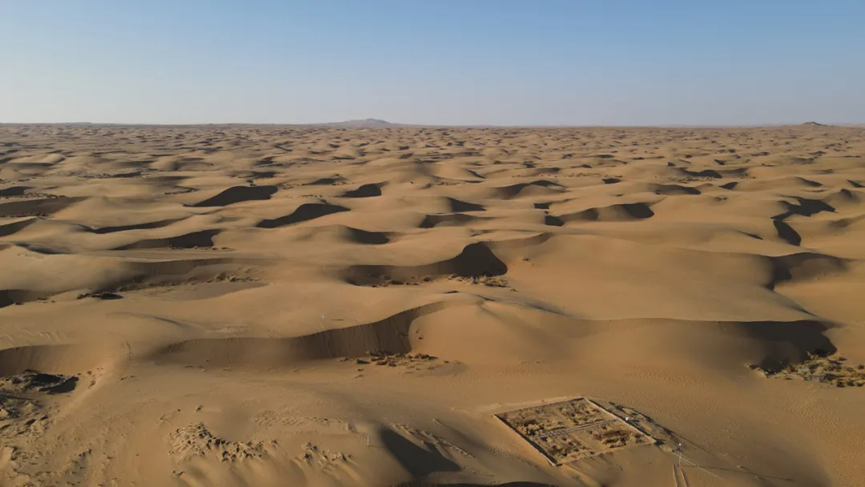 The Ulan Buh Desert in western Inner Mongolia is on the front lines of scientific research to slow desertification.

Reversing desertification may seem like a daunting – and even impossible – task, but broader global awareness and efforts to reduce carbon emissions, safeguard arable land, preserve forests and grasslands, and manage finite water supplies are all steps in the right direction to at least reducing its pace.

Scientists in every corner of the world are dedicating themselves to this effort, including Professor Yi Zhijian from Chongqing Jiaotong University in China. His team has worked on the project of desert greening. The team mixed sand with plant fiber adhesive, making the sand able to self-repair and self-adjust, and thus sustain moisture and fertility and reinforce an ecological virtuous cycle.

There are 1.73 million square kilometers of desert in China, accounting for about 18 percent of the country's territory. Reclaiming just 1 percent of China’s desert would make an additional 1.73 million hectares available for productive use.

The Ulan Buh Desert in western Inner Mongolia covers nearly 10,000 square kilometers, making it one of the eight largest deserts in China. It is here that Yi and his scientific research team decided to conduct their experiment using a plant fiber adhesive that enables sand to retain water and fertilizer like soil. 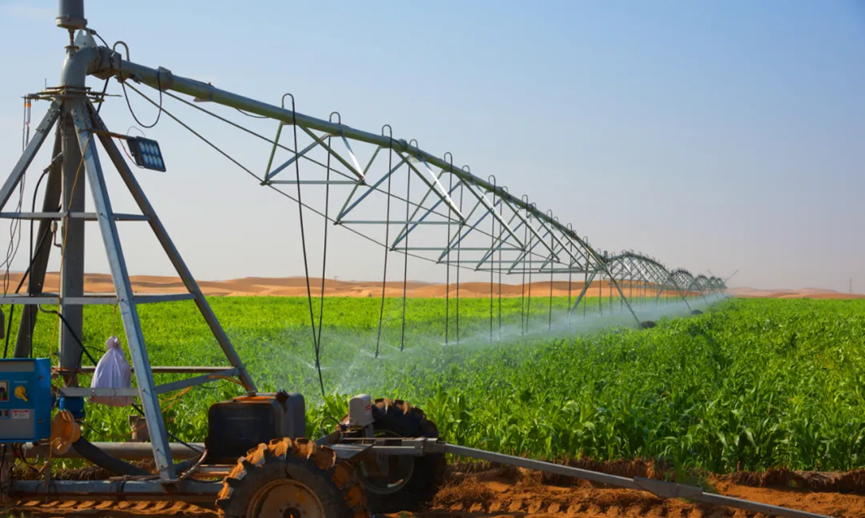 The greening experiment has been expanded from a 10-hectare plot of land to nearly 7,000 hectares since 2016. More than 100 kinds of crops have been planted, including tomatoes, sorghum, peppers, watermelon and flowers. Not only have the plants successfully grown during the five-year experiments, but the local ecosystem has also improved, with foxes, frogs, birds and other animals now occupying the reclaimed spot that once was a desert.

Traditional agriculture relies on a combination of nature, the farmer’s skill and experience, and a bit of luck. To improve their chances, Yi’s team added another factor to the formula – big data and data analytics.

Using sensors and advanced analytics to capture, track and analyze plant and environmental information, the team built an artificial intelligence model to help determine the best recipe for growing plants in the desert.

With more than 60,000 sensors, the experiment will generate at least 1 terabyte (1 million megabytes) of data every day and require more than 50,000 terabytes of data-storage capacity a year.

Tencent Cloud contacted Yi’s team after they learned about the research in 2018. Tencent Cloud signed on to help the team manage that information to accelerate the deployment.

Tencent Cloud engineers designed an edge data center, named Nano T-block, specifically for desert soil research projects. This unique data center has natural cooling inside along with all the functions of a standard data center, such as power distribution, air conditioning, security, fire protection and IT equipment.

Nano T-block has the computing power to meet the team’s massive demand for data-processing in the desert. It collects, processes, analyzes and transfers data at high speeds, giving scientists a quick and comprehensive view of environmental conditions and changes on the farm. 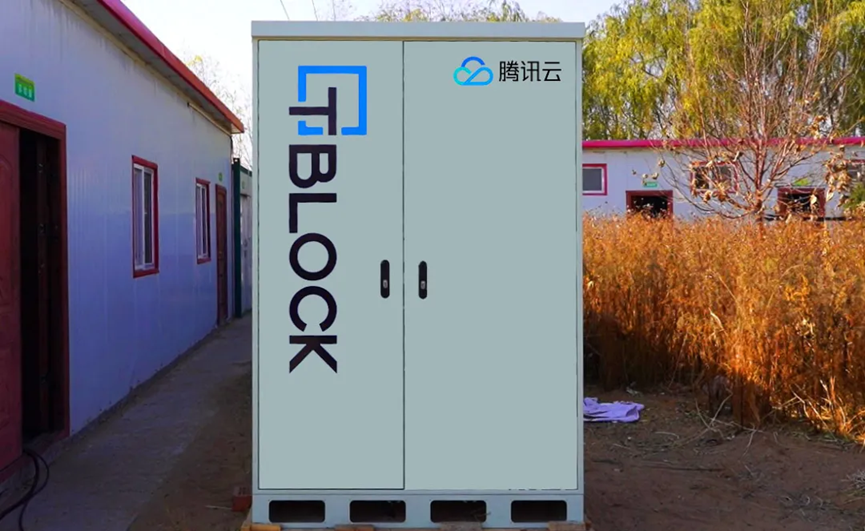 Nano T-block, the small yet powerful edge data center is set up to study desertification.

The data center has built-in smart solutions created by the Tencent Cloud Internet of Things development platform to enable researchers to monitor in real time the soil humidity, salinity and other data and precisely control the amount of water the plants receive.

Lessons learned on the Ulan Buh project are being shared with other sand-improvement initiatives in China and the Middle East, according to members of the Chongqing Jiaotong University team.

Climate change is continuing to advance, putting pressure on delicate ecosystems in many parts of the world. Tencent will continue to invest in technology that helps re-balance the world’s ecosystems, slows climate change, and ensures we will leave behind a healthy planet for our children and grandchildren. 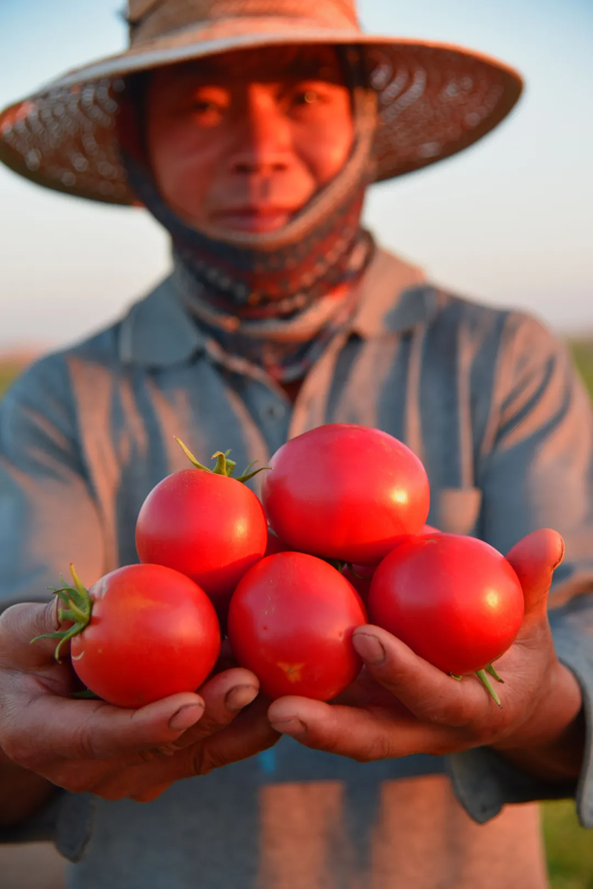 A farmer holds tomatoes grown in the Ulan Buh Desert.