Helping the Elderly Succeed in a Digital World

These days it seems like everybody communicates on social media, streams TV and movies online, and does their banking through an app. While this might be normal to many people, these new tools based on cutting-edge technology can often be unfathomable for older people who grew up in a much different time. As more parts of day-to-day life migrate online, many senior citizens are falling behind.

Research shows that by 2050, one out of six people in the world will be 65 or older. China alone already has 260 million people aged 60 and over, accounting for nearly 20 percent of its total population. About 96 million elderly people in China are active users of the Internet. 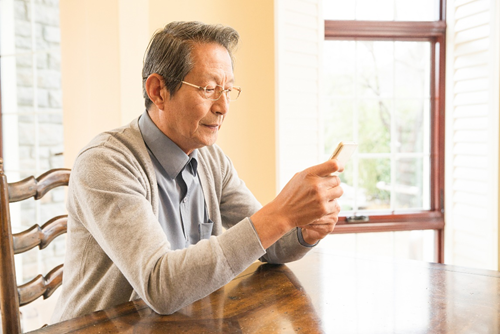 While it’s good news that so many seniors are already online, they are also frequently the targets of online fraud or unreliable -- even fake -- information. For instance, some apps try and send users to a risky app or website with a huge, conspicuous "open" button at the center and small "skip" button in the corner. These unscrupulous app designers are putting older people and their family and friends at risk.

To help remedy these issues, many businesses are trying to find solutions to help older internet users. Tencent recently launched a poll on its Weixin Official Account to get feedback on the kinds of services people would like to see to help seniors, with people calling for fraud alerts (22 percent), larger font sizes (21 percent), and fewer pop-ups (20 percent).

Making the internet safer for seniors isn’t something that can be done through one app, or by tweaking one feature – it requires a multi-pronged approach. In the process of investigating these pain points, Tencent has already started to make some progress. For instance, Weixin, the popular social media and chat app in China's Mainland, has recently enlarged its default font size. It’s a small, but important, change that enables people with poorer eyesight to clearly see what’s on the screen.

Weixin Pay also officially launched a "Worry-Free Special Line for the Elderly" in May. Whenever customers want to check cost details, add a bank card to their account, or transfer money, users aged 60 and older can access the special customer service line and receive personal, one-on-one help from a real person. Tencent staff have been trained to use plain, easy-to-understand terms and expressions and are prepared to answer a variety of questions regarding processes, collection, payment and more.

Tencent staff members can speak various dialects, too, so elderly users from different regions across China can get the help they need - even if they don’t speak Mandarin. More than half a million issues have been resolved since this new, special service was launched. 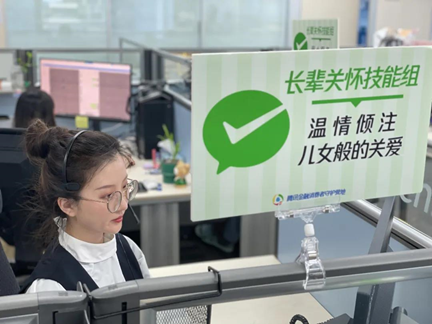 In addition to optimizing product design and accessibility, Tencent also uses platform and technical capabilities to work with industry, academia and the public through the Tencent Light Innovation Challenge. This program encourages citizens to solve social problems with creative ideas and technology.

Tencent received proposals from 663 teams comprised of nearly 3,000 people for this year's challenge. Among them, three young people who had no prior programming knowledge used the Weixin platform to create a Weixin Mini Program named "The Old Kids." The contributors determined which functions were needed based on requests from their grandparents.

According to challenge designers, many seniors have trouble sorting waste items for disposal and can’t remember the different categories. Some grandparents are illiterate or can’t read the small words and dates on food packages because of deteriorating eyesight, while other seniors are easy to target with internet rumors and scams.

To tackle these pain points, designers created functions such as “literacy reading” and “waste sorting.” Users can simply take a picture of some words and the Mini Program will automatically read it out loud. Therefore if a user takes a photo of the waste label, the Mini Program can immediately tell them what it is.

“The Old Kids” Weixin Mini Program offers basic, yet most in demand functions for the elderly.

Another issue is distance. In China, it’s common for young people to leave their hometowns in pursuit of career opportunities in big cities. When they do, they sometimes leave their children behind to be cared for by their parents. In fact, 65 percent of seniors who remain in their hometowns help care for their grandchildren, creating a new opportunity for technology to help. A team designed a Mini Program called, "Grandparents Voice Calendar," which serves as a baby-care tutor plus digital babysitter.

Users can input the age of the child, after which the service will automatically create customized parenting schedules, activities, and lessons. Users can also learn about advanced parenting content through the Mini Program including scientific information on feeding infants, keeping them healthy, and helping them learn.

Each year, Tencent opens up its AI capabilities, cloud technology and digital platforms to work with developers who are enthusiastic about public welfare and using the power of technology to solve important problems that affect nearly all of us.

It’s easy to talk about Tech for Good, but it’s important to follow through. For example, in 2017, the Tencent mobile version of QQ launched a text reader function, which is based on the optical character recognition capability of Tencent YouTu Lab. This has been a big help and convenience for the visually impaired and the elderly.

In April, Tencent announced a plan to promote sustainable innovation for social value and integrate the existing corporate social responsibility and charitable activities into a new Sustainable Social Value Organization (ssv.org). The company will also invest an initial RMB 50 billion (US$7.67 billion) to fund initiatives in specific areas including science, education, rural revitalization, carbon neutrality, food/energy/water, as well as assisting with public emergencies, technology for senior citizens, and public welfare.

After establishing the SSV, Tencent conducted a survey among its employees and found that roughly 70 percent of the problems they encounter are related to caring for their aging relatives. Therefore, SSV has established a Senior Citizens Laboratory to specifically explore opportunities for combining emerging technologies with the needs of older generations.

Now is the time for technology companies like Tencent to create products that help the aging population integrate into the digital world and bring benefits to all of us.