On the agreement signing day Zhang Gaoli Politburo Member and Tianjin Party Secretary held a cordial meeting with the Tencent delegation led by Charles Chen Co-Founder and CAO and congratulated on the project signing on behalf of Tianjin Party Committee and Municipal Government. Secretary Zhang Gaoli said that the investment in Tianjin by Tencent the leader in China’s Internet and network cultural industries provides great significance for advancing the electronic information industry. Tianjin supports the project and hopes that it can accomplish great achievements in the near future.

Charles Chen introduced to Secretary Zhang Gaoli the Tencent’s growth and strategic operations in 2010 and its project history and status in Tianjin and expressed sincere thanks to Tianjin Party Committee and Municipal Government for their persistent support to the Tencent project. Meanwhile he said that Tencent will expand its investments in Tianjin and projects ba

Currently the development and opening of Tianjin Binhai New Area is included in China’s overall development strategy for the Eleventh Five-Year Plan bringing about historical opportunities for the Area. As the leading internet company in China Tencent has hundreds of millions of users advanced technologies and rich Internet applications. It will seize the opportunity of its project expansion in Tianjin to offer better services for its massive users and Cloud Computing Center for network services across Tencent. 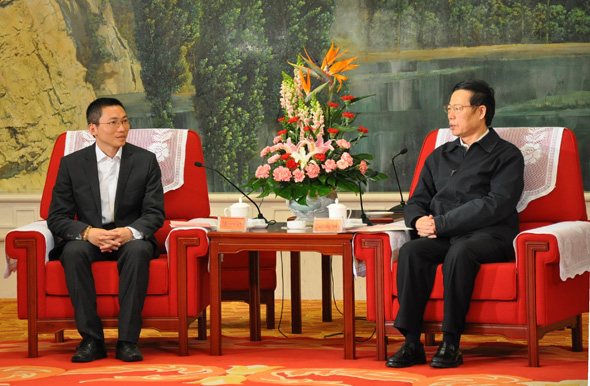