The award granted to Tencent QQ suggests that the creativity of China’s Internet industry has been highly acknowledged by WIPO. QQ has outstanding performance compared with competing products in terms of technical sophistication and practicality according to a WIPO judge.

Tencent was granted Chinese Patent Gold Award at the 12th Chinese Patent Award Conference co-organized by the State Intellectual Property Office (SIPO) of the People’s Republic of China and WIPO on November 13 2010. That was the first ever national golden award for patents granted to China’s Internet industry. Known as “the pioneer in low-carbon industry growth” the patented technology is primarily used to remove bottlenecks in Internet development such as bandwidth resources and online security.

Innovation is essential for both the company and its employees according to Tencent. As an advocate of innovation culture Tencent endeavors to provide its employees with opportunities and atmosphere for innovation enabling them to maintain active thinking and enthusiasm for innovation even when they are busy with their jobs. It has an internal innovation center which it hopes can become a source of things ranging from innovative concepts to innovative products. Tencent encourages its employees to “do things that create value for users and that interest you.” It also encourages them to innovate as they want in those areas. Additionally Tencent encourages its employees to keep learning at work by providing them with various learning resources. With a series of institutional arrangements it combines learning with corporate businesses and activities at various levels achieving innovation-ba

Both Francis Gurry and Wang Binying appreciated and marveled at Tencent’s innovation culture. They recognized the achievements that the company has made over the past twelve years while believing that an innovation-ba 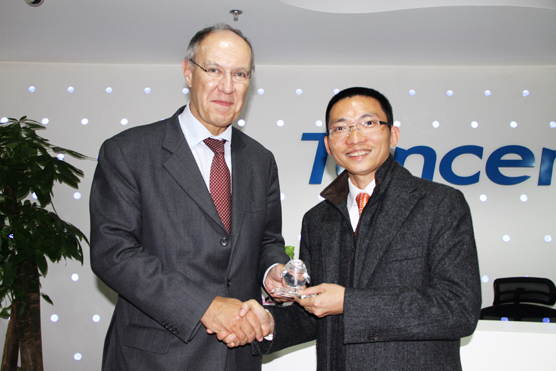