On July 15 2008 Tencent announced its contract with CCTV.com for Internet broadcasting of Olympics events during a joint press conference held in Beijing with fellow Internet pla

The Beijing 2008 Olympics will be the largest ever in terms of new media platform use in broadcasting events and thus marks a major milestone for China’s Internet industry. Tencent Sina and Netease had each invested major resources in their reporting systems for Olympic Games. With this joint agreement the three companies plan to enhance their Internet Olympic platforms with more comprehensive coverage richer content and greater possibilities for Internet users and customers alike. According to sources CCTV’s contract partners were chosen according to International Olympic Committee criteria namely: ability to protect copyrights proven broadcasting capabilities and corresponding market influence. CCTV.com general manager Wang Wenbin remarked during the press conference “As a Chinese portal and one of the country’s most powerful Internet and video broadcasters Tencent was undoubtedly a top priority.”

DCCI Internet Data Center director Hu Yanping stated that with Tencent’s current infrastructure the company has its users fully covered. The QQ client end is a major platform used by numerous of Internet users to communicate with one another and to exchange ideas. In conjunction with services such as live broadcast and broadcast on demand via QQ.com Tencent can meet users’ needs on all levels. Through Tencent the same content can be broadcast to more audiences. Therefore “Tencent will surely win”.

Mr. Qu Xiaodong general manager of CCW Research pointed out that as an integrated Internet media company Tencent knows its users better and offers greater interactivity than any other Chinese website. Through QQ QQ.com and Qzone Tencent can create a better interactive platform than other portals for smoother communications and exchange among different Internet users.

According to research conducted by ACNielsen the Internet user coverage of Tencent Netease and Sina will exceed 90% during the 2008 Olympics. This coverage will not only increase the influence of new media in Olympics reporting but also boost Olympics reporting possibilities and help develop the popularity of Olympic-related culture.

Tencent Chairman and CEO Ma Huateng said “Tencent Sina and Netease the three most representative Chinese Internet enterprises plan to capitalize on their Internet technology strengths nationwide coverage and integrated resources to provide users in the spirit of cooperation sharing and win-win with the best Olympic reporting services around the clock.” 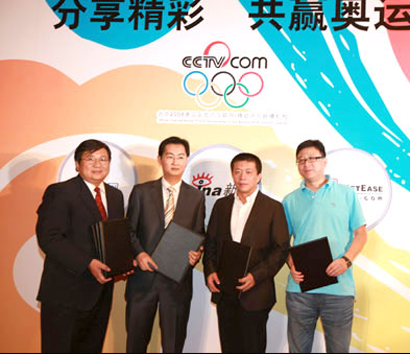