Tencent Vice President Sun Zhonghuai makes a donation at the CCTV Earthquake Relief Fundraising Event. "China has suffered a terrible blow. We all must undertake the responsibility of helping our fellow citizens. We members of the online industry will do our utmost to help with relief efforts and help those affected by the earthquake rebuild their homes."

Efforts on earthquake relief must be carried out under the most urgent! On May 18th 2008 in order to help rebuild the earthquake zone and fulfill corporate social responsibility Tencent donates another CYN 10 million which includes CYN 2 million from more than 5000 Tencent employees at "Compassionate Giving – 2008 Earthquake Relief Fundraising Event" which is jointly sponsored by the CCP Central Committee Propaganda Department and six other governmental departments. At present Tencent has already donated a total of CYN 20 million over four installments.

Tencent Co-Founder and CAO Chen Yidan say "Over the last week the earthquake has been tugging at the heart of everyone at Tencent. The material and human damages caused by this earthquake have been very severe. As earthquake relief continues the rebuilding of homes will be the hardest task ahead. As China's very own online enterprise Tencent is obligated to be part of the rebuilding efforts. Tencent will work with the government and society to provide as much support as the company can to help victims of the Sichuan earthquake. We especially would like to thank the vast number of Tencent users for their acts of compassion. Their dedication has given us courage and faith in our abilities to rebuild lives." 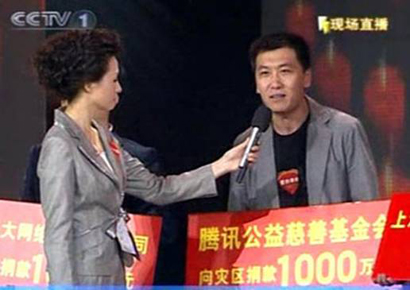