Digitization and Innovation Will Drive the Post-Pandemic Era

If you had made plans for 2020, chances are you had to change them. The global pandemic has been a shock to the world, forcing the public and private sectors to deal with a raft of new unexpected economic and health-related challenges. History has demonstrated, however, that periods of profound change have the potential to unleash a wave of innovation, which could be an important silver lining to a difficult year.

Tencent’s Chief Strategy Officer and Senior Executive Vice-President James Mitchell recently sat down with Professor Eric Maskin, the Nobel Prize winner in economics in 2007, to discuss how economies are recovering from COVID-19 and how innovation is leading the way. Maskin is a pioneer in mechanism design theory, a field in economics that takes an objectives-first approach to economic incentives. He has recently put his mind to work to analyze globalization and how economic mechanisms could be applied to stimulate innovation and the development of a vaccine for COVID-19. The discussion is part of the Tencent Dialogue series organized by the Tencent Research Institute. 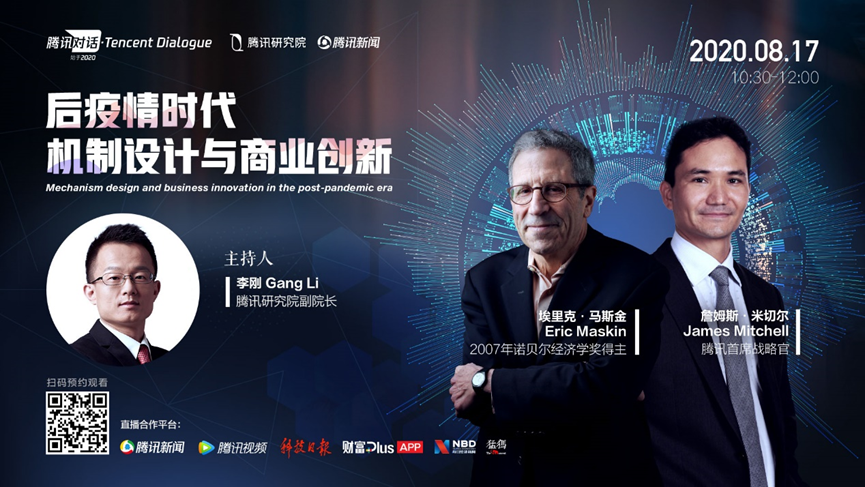 One thing is clear: we are already seeing hundreds of millions of people embrace technology in new ways, whether it's via online learning, working from home, or even getting healthcare consultation online. Companies, too, are adapting and changing quickly, identifying new opportunities as a result of the societal change brought about by the pandemic.

On the positive side, these external shocks often have a way of stimulating innovation – not only by directly fuelling technological innovations such as vaccine research and epidemic prevention measures, but also by indirectly driving innovation and new ideas from entrepreneurs, governments, and companies.

Innovation is the theme of 2020

Maskin and Mitchell agree that despite the roller-coaster year, 2020 is all about innovation. “Necessity is the mother of invention. We are most innovative at times when we face the most difficult situations,” Maskin said. It might seem counter-intuitive at the first glance, but innovation has taken root in profound new ways as a result of the pandemic and subsequent lockdowns.  Mitchell expects three key themes to emerge in a post-pandemic world:

Maskin added that mechanism design – his area of expertise – can play a critical role in advancing innovation and solving economic problems in the real world.

“The major principle of mechanism design is how to allow social participants to achieve an important social goal through behaviour,” he said during the discussion. The Nobel Laureate cited the auction for radio spectrum resources two decades ago as a classic example of how mechanism design helps with economic development and technology innovation. The concept of companies bidding for the right to use radio airwaves ensured competition but also maximized the utility of scarce spectrum resources, in turn helping drive the telecom revolution. Maskin said mechanism design can be applied in many other areas, from the current global pandemic to longer-term challenges such as climate change.

Digital tools have demonstrated their value in helping to combat the pandemic, especially for individuals. The consumer Internet is well developed in most American, European and Asian countries while FinTech, the integration of technology into financial services, has expanded considerably during the pandemic and made commercial activity easier for small businesses and individuals.

In comparison, Mitchell said, the internet penetration rate in China enterprises continues to lag behind its penetration rate among Chinese consumers, contributing to highly varied responses to the COVID-19 shock. Major economic indicators in China generally fell sharply as the virus spread - industrial production dropped 8% in the first quarter, retail sales fell 19%, and sales of consumer goods declined 16% in March. But during the first quarter, the financial industry grew by 4% year-on-year, the information transmission, software, and information technology service industries grew by 4%, high-tech manufacturing rose 9% in March, and industrial robot manufacturing grew by 13%.

As Industries with high degrees of automation and digital penetration generally weathered the storm, traditional industries which were harder hit are now seeking to develop similar defences by forging a more intelligent and networked industrial chain. Mitchell suggests enterprises leverage new, enhanced infrastructure such as 5G, the Internet of Things, intelligent terminals, sensors, and more to strengthen the resilience and stability of the industrial chain.

Mitchell noted that the digitization process doesn’t happen overnight. In many traditional industries in China, offline data needs to be digitized before it can be put to productive use, which takes time and support from third-party service providers. Tencent seeks to help enterprise clients digitize their data by providing on-premise service at our customers’ locations.

Digital transformation can directly impact employees and put their careers in jeopardy. Mitchell encourages firms to pay attention to worker protection and mitigate the impact of unemployment caused by automation, industrial intelligence, and the Internet of Things. The Industrial Internet will make some traditional jobs redundant, but it will also create opportunities for exciting new careers. It is critical to upskill workers and help them to transition to the new economy.

The pandemic is akin to a large-scale natural experiment, which provides a huge amount of room to test different solutions. The isolation and lockdown have effectively accelerated and promoted the development of remote meetings, distance education, online social networking, online games, digital payments, and e-commerce. Companies like Tencent have already seen some of these changes, Mitchell added, emphasizing three key areas impacted during the pandemic.

Agile innovation. COVID-19 has forced many companies to learn to change on the fly. A good example is Tencent Meeting (VooV Meeting in markets outside of Chinese Mainland), whose full launch was accelerated by several months due to the pandemic. Within two months of the launch, Tencent Meeting had more than 10 million daily active users, making it one of the most-used video conferencing applications in the world. The software wasn’t perfect at that time, but the Tencent Meeting development team recognized the immediate demand for video conferencing and worked much faster than originally planned. They learned quickly, listened to user feedback, and ensured the app was ready to go when it was needed most. The team saw an opportunity and grasped it. 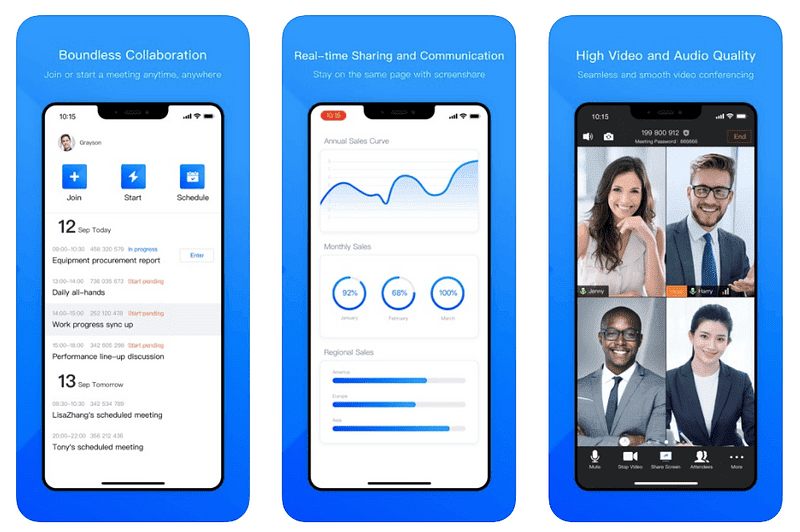 Of course, Tencent isn’t the only company in situations such as these. Others, too, have had to reinvent processes and systems practically overnight, from interface design to computing capability and market strategy. Product innovation is an ongoing process, and user feedback is critical to improving products and services, especially when development is happening at light speed.

Remote collaboration. Lockdowns forced people to work from home in many parts of the world, which accelerated the adoption of remote collaboration tools. While we all look forward to the pandemic subsiding, we expect users to continue using these services because of their convenience and reliability.

One prime example is online healthcare consultation. As Maskin said, “necessity is the mother of invention”, and the necessity of healthcare amid lockdowns drove demand for self-diagnosis tools and remote medical services. Tencent Health quickly rolled out its Mini Program to help screen high-risk populations and provide medical advice for the public. We also used artificial intelligence to assist image reading and shorten the screening time of chest computerized tomography (CT) scans from 15 minutes to just five.

Other remote technologies range from distance education, already part of a new norm for schools and students, to the increasing use of drones to deliver products, and the rapid adoption of online collaboration app.

Business adaptability. Adaptive repurposing is when businesses can turn quickly to address a new, unrelated market. We’ve seen this happen in several sectors, from local automobile manufacturers producing masks to game firms developing online education courses. We should pay special attention to any reforms that promote greater flexibility, because dynamism and creativity are important to help us overcome and thrive in a post-pandemic era.

Towards the end of the discussion, Mitchell noted that he had re-read William Gibson’s 30-year old science fiction novel Neuromancer during the lockdown. What's striking about it, Mitchell said, is that the author saw something like the widespread Internet use emerging decades before it happened, but that the way people use Gibson’s Internet is very different from our reality – they can only log in from specified consoles, however their experience is completely immersive and a close facsimile of the physical environment.

That’s not how the Internet works today – at least, not yet. We all use the Internet much of the time via smart phones, and we rely on specific apps to solve specific problems, such as a messaging app to keep in touch or a meeting app to collaborate with colleagues, and the experiences are separate software interactions with separate social and physical graphs, mediated on screens occupying a fraction of our vision.

“But now, with people being forced to stay at home for an extended period of time, we see the demand for a more holistic virtual experience,” Mitchell said. Experiences in the future could be more integrated and better reflect the physical world.

“That’s a different form of virtualization more akin to the vision of thirty years ago, where we actually replicate more physical world experiences inside the virtual world, as opposed to the current dominant metaphor, which is having the virtual world through our phones at all times.”

The Pandemic is Forcing Schools to Rethink Education, Integrating Technology to Improve Learning